Call of Duty: Black Ops III is an upcoming first-person shooter by Treyarch and Activision. The game will be released on the PS3, Xbox 360, PS4, Xbox One and PC on November 6, 2015.

A multiplayer beta will be released on August 19, 2015 for the PlayStation 4, and the Xbox One and PC on August 26, 2015. The multiplayer in black ops 3 has evolved substantially since BO2 and new features like wall-running and boost jumping have been added from Advanced Warfare.

The Pick 10 system is back and allows cod black ops 3 weapons to be customized with attachments and other features as needed. The Pick 10 doesn't cover any Scorestreaks since they are chosen separately. Many of the cod black ops 3 scorestreaks will be familiar to Black Ops 2 players, like the HC-XD, which is a futuristic RC-XD with boosters and can drive on walls.

Some long running perks have been removed or moved to the Specialist system. While some cod black ops 3 perks, like Extreme Conditioning, are out due to players having unlimited sprint. Fans of the Zombies mode can expect to see their favorite Perk-a-Cola machines back in action in the cod black ops 3 zombies perks system.

Black Ops 3 will have four DLC map packs released in 2016. Like its predecessor the cod black ops 3 maps and DLC are designed with an emphasis on three lanes, making them extremely player friendly.

Black Ops II's fourth and last DLC, Apocalypse, was released on 27th of August for Xbox 360 and a month later for PlayStation 3 and PC. Apocalypse is priced at 1200 MS Points or $15.

Apocalypse features a total of 4 multiplayer maps, of which 2 are remakes. There is also a new Zombie map:

The following 10 new achievements and trophies are available in Apocalypse:

Ten new achievements and trophies are available in this DLC:

Ghosts' new Create-A-Soldier system features over 30 new weapons and including a new Marksman Rifle weapon category. Like Treyarch, Infinity Ward has balanced all Call of Duty: Ghosts Weapons so there is no vastly superior weapon in any category. The perk system in COD: Ghosts has also received updates: all perks in the game are divided into 7 categories and each category has 5 perks. Players have 8 points to spend on the Call of Duty: Ghosts Perks, while at the same time each perks cost varies based on what it does - For example, Recon costs 1 point, while Danger Close is 3 points.

Strike Packages from Modern Warfare 3 are back in Ghosts. There are 24 Call of Duty: Ghosts Killstreaks to choose from and they are divided into Assault and Support packages. The 14 new multiplayer maps in Call of Duty: Ghosts all have areas that can be altered or destroyed - the Free Fall pre-order bonus map, for example, is a skyscraper that continues to fall throughout the match.

Uprising includes another 4 new multiplayer maps and a Zombie map:

The following 10 new achievements are available in Uprising:

The DLC includes four all-new multiplayer maps and a new Zombie game mode + map. There is also a new bonus multiplayer weapon called the Peacekeeper, which is a powerful SMG.

The following 10 new achievements / trophies are also included in the DLC:

The Xbox LIVE Marketplace now has 16 different Call of Duty: Black Ops 2 avatar items available for purchase. The T-Shirts and Hats are 80 MS Points each and special props, like the AGR and Assault Shield, are 240 MS Points. The Special Force and Zombie outfits cost 400 points.

Login to Xbox LIVE and check them out. 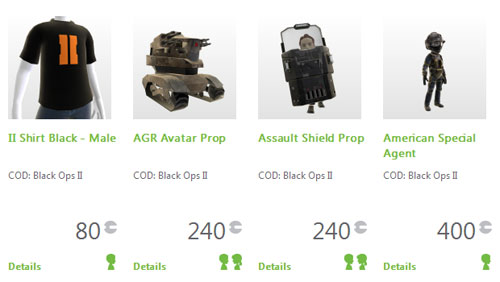 Treyarch's security and enforcement policy will determine how each player's infractions will be handled by the Black Ops 2 security team. All infractions undergo a thorough review process and penalties are final.

With majority of the gamers playing on Xbox 360 and PS3 it's likely that they will be heavily monitored by Treyarch due to their large boosting and hacking scenes.

Last year's Battlefield 3 PC allowed players to change their FOV (field of view) from 60 to 90, and with the proper tools, bypass the limit and go beyond it. With that in mind, you would expect that Black Ops 2 PC would do the same, but Treyarch's Director of Technology, Cesar Stastny, also known as pcdev, revealed on Twitter that the game will be limited in several ways due to technical reasons.

Although the max FOV will be 80, it's still better than the default value of 65 what Modern Warfare 3 had last year. Going from 65 to 90 FOV can make a huge difference, checkout the example below:

Black Ops II PC was also supposedly going to have no FPS (frames per second) limit, but that has changed to 200 FPS, at least for ranked matches since it "prevents uber rigs from dominating dedicated server cycles".

Even with the removal of dedicated servers, and everything above, it seems that BO2 for the PC is still miles ahead of MW3's PC release. Obviously these FOV and FPS changes are not available to the Xbox 360 and PS3 versions.

It looks like a lot of companies have stepped up to deliver high quality Black Ops 2 themed gaming peripherals for Call of Duty fans. First we have SteelSeries releasing exclusive premium-quality PC peripherals: a gaming mouse and three QcK mousepads featuring BO2 artwork.

The SteelSeries "Call of Duty: Black Ops II Mouse" offers PC players professional-grade hardware that's powered by the SteelSeries Engine. The mouse is priced at $69.99 / 69.99 and features the following:

The QcK Mousepads have non-slip rubber bases holding them in place and feature a surface that offers a smooth and consistent glide for your mouse. The mousepads are priced at $14.99 / 14.99 each.

BigBen Interactive has also announced their BO2 themed Bluetooth controller. The wireless controller has been made for PS3 gamers in mind, but since it's Bluetooth-based, it should work on PCs with a Bluetooth adapter. Amazon France has the controller on sale for 49.99, which is about $64.

The controller is backlighted and has non-slip, ergonomic triggers and rubber grip. As with most PlayStation 3 controllers, it features a 6-axis and tilt sensor with 2 vibration motors. It also has a rechargeable NiMH 700mA battery and can be recharged with a USB cable. 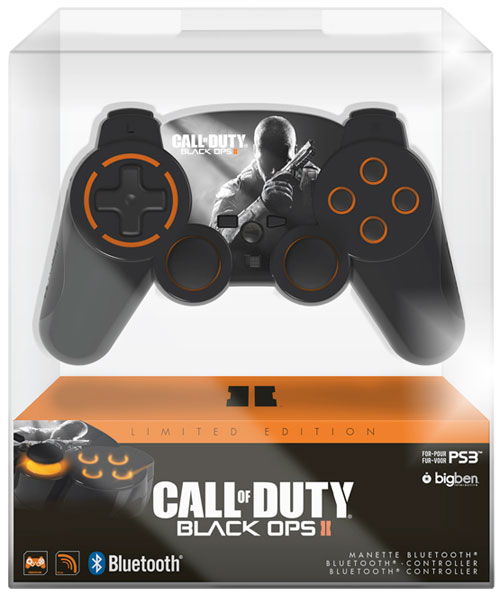 Beachhead Studio, the company that's responsible for Call of Duty Elite, has recently updated the CoD: Elite website for Black Ops 2's launch. A lot of BO2 related data was added, for example, the Clan HQ and Competitions pages, but it looks like the Prestige Emblems for Black Ops II were also accidently released.

Check out the high quality versions of them below: 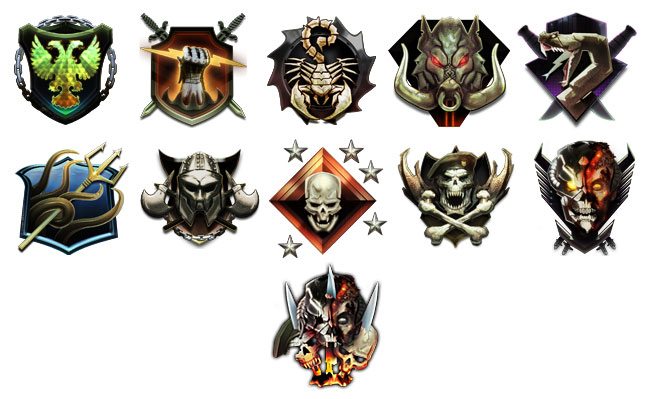